Ribonexus (previously Aglaia Therapeutics), a biotechnology startup developing promising new therapies that can overcome resistance to current targeted therapies in cancer patients, and French pharmaceutical group Pierre Fabre today announce the signing of an exclusive license agreement on a series of Pierre Fabre patented small molecules targeting the Eukaryotic translation initiation factor 4A (eIF4A). This target is highly expressed in a variety of solid and hematologic cancers, including melanoma, and associated with resistance to many current therapies. Inhibiting eIF4A appears therefore to be a promising therapeutic approach.

Founded in 2021 by Institut Curie, Gustave Roussy and Advent France Biotechnology, the start-up recently announced a €4M fundraising for the development of next-generation therapies capable of overcome the resistance of tumor cells to targeted therapies. The company was born from the union of the scientific and medical expertise of its co-founders, Stéphan Vagner, PhD,head of the Genome Integrity, RNA and Cancer Unit (Institut Curie, CNRS, Inserm), and Professor Caroline Robert, head of the dermatology department and co-director with Stéphan Vagner of the translational research group on melanoma within the Inserm U981 unit at Gustave Roussy.

In return for the license rights granted to Ribonexus, Pierre Fabre will receive development and sales milestones payments and royalties on future sales. Financial details are not disclosed.

To foster its pre-clinical development program, Ribonexus will benefit from Pierre Fabre’s knowledge and support on the pharmacology and chemistry of the licensed molecules.

We are very pleased to enable a license agreement with a young French biotech company, whose strategic direction is based on the solid and recognized oncology expertise of its founders. This cooperation was an obvious choice for Pierre Fabre as we share with Ribonexus the same ambition to bring the best innovative treatments to cancer patients. We look forward to providing Ribonexus with our compounds directed against eIF4A, an emerging target to fight cancer and resistance to targeted therapies.

The startup changed its name to Ribonexus, effective since November 2021, to reflect the central role of eIF4A in the translation of specific mRNAs (messenger ribonucleic acids), cancer development and resistance to targeted therapies. 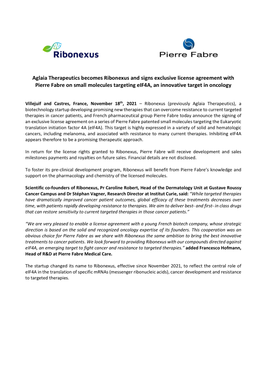