A new strategy in immunotherapy: Institut Curie applauds the fundraising achieved by its spin-off Egle Therapeutics

Institut Curie
Share
Founded in 2020, Egle Therapeutics has just raised €40 million, mainly from LSP and Bpifrance, via its InnoBio 2 fund, as well as Fund+, Bioqube Ventures and Takeda Ventures Inc. . Spin-off from Institut Curie, this biotech company is a pioneer in the field of regulatory T cells immunomodulation, applied to oncology and autoimmune diseases. The funds will be used to accelerate its development for future clinical applications.

Egle Therapeutics (Tx) was born from the work of Eliane Piaggio, Inserm research director at Institut Curie where she heads the Translational Immunotherapy team, and Luc Boblet, a multi-entrepreneur in the biotechnology field. The company is a pioneer in the field of immunomodulation[1] of regulatory T cells (Tregs). These cells are responsible for regulating the immune response and the phenomenon of "self-tolerance" that allows the body not to attack its own constituents. In some cases, these processes are deficient or absent, causing autoimmune reactions.

Eliane Piaggio's work has highlighted the major role of Tregs in a context of cancer: they attenuate tumor immunity and promote the spread of the disease.

This discovery has allowed us to direct our research towards the specific targeting of Tregs associated with tumors. Our strategy should allow us to generate strong anti-tumor immune responses, while sparing other Tregs, thus avoiding generalized immunosuppression[2].

These studies have also led to the development of interleukin (IL-2) variants with modified biological activity - IL-2 being a molecule essential to the functioning of Tregs - capable of activating or inhibiting the activity of Tregs.

It is the combination of these two major discoveries that led to the creation of Egle Tx in 2020 with a pioneering strategy in the field of immunotherapy: the specific targeting of the most immunosuppressive Tregs. Its innovative technology is based on a translational platform for the discovery of new targets specific to tumor Tregs and the development of a unique portfolio of Treg-modulating drugs that includes a series of patented IL-2 variants. The goal is to develop new therapeutic approaches capable of restoring the immunity of patients suffering from cancer or autoimmune diseases.

The company has just raised €40 million in Series A[3] financing, mainly from LSP[4] and BPI, through its InnoBio 2 fund[5], as rejoices Eliane Piaggio, co-founder of Egle Tx:

This impressive round of financing is the culmination of years of translational research conducted by my team, which led to the creation of Egle Therapeutics, and brings us one step closer to providing innovative therapeutic solutions for patients.

With this funding, the company will accelerate the development of its two lead assets into the clinic and strengthen its internal drug pipeline.

This exceptional fundraising is, once again, indicative of the company creation strategy led by Institut Curie, whose original incubation program has led to the emergence of 28 start-ups based on innovative technologies developed by Institut Curie's scientific and medical teams, as explains Cécile Campagne, head of Institut Curie’s Technology Transfer Office and deputy director of Carnot Curie Cancer:

Securing this level of funding less than two years after the creation of the company highlights the scientific excellence of Eliane Piaggio’s Inserm Translational Immunotherapy Team at Institut Curie. It is both a real satisfaction for the work accomplished and a decisive step forward in the development of the technology.

[1] Therapeutic application resulting from the deepening of the knowledge of the immune response. Its principle? To inhibit or activate the proliferation of regulatory T lymphocytes, causing respectively the limitation of inflammatory reactions and the stimulation of a deficient immune system.

[2] Reduction or suppression of the immune system's ability to fight infection and disease.

[3] Series A comes after the seed phase of a start-up's development. It is generally used to finance the growth and internationalization of the company.

[4] The Dutch investment fund LSP is one of the largest and most experienced healthcare funds in Europe.

[5] InnoBio 2 is a French investment fund dedicated to life sciences, managed by Bpifrance, which is also one of the fund's subscribers along with Sanofi, Boehringer Ingelheim, Takeda, Ipsen, Servier, BMS and Pasteur Mutualité. 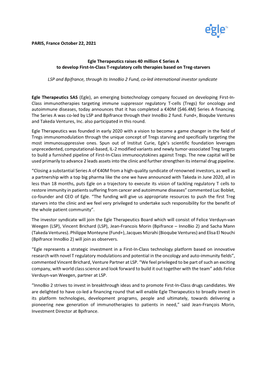 Egle Therapeutics, the latest start-up company to be supported in its creation by Institut Curie, is advancing at high…