Institut Curie
Share
On June 12th 2020, Institut Curie and Clarins were rewarded for their work with a publication in Nature Communications. A key discovery on the role of caveolae in the pigmentation of human epidermis : a revelation that could pave the way to understanding their role in cancer.

A first collaboration in 2012 marked the beginning of the partnership between Institut Curie and Clarins. On June 12th 2020, the two partners wrote a new page in their history, with their new publication appearing in the prestigious scientific journal Nature Communications. Their discovery ? The role of caveolae - small intracellular structures found in melanocytes - in the processes of homogeneous pigmentation and optimal skin photoprotection.

In 2016, the two partners embarked on this project involving the Structure and Membrane Compartments (led by Graça Raposo) & Membrane Dynamics and Mechanics of Intracellular Signaling (Inserm/CNRS) (led by Christophe Lamaze) teams of Institut Curie, together with an R&D team from Clarins. What is the objective ? To study the role of intercellular contact during skin pigmentation."We started from a common scientific interest : the identification of a new concept in pigmentation", explains Cédric Delevoye, Inserm Research Director & project leader in Graça Raposo’s team. Four years later, the researchers highlighted the physiological role of caveolae in the pigmentation of human epidermis, a natural photo-protective phenomenon of the body due to melanocytes and keratinocytes. During intense sun exposure, these epidermal cells communicate in order to produce and diffuse pigment through the tissue, acting as a natural screen. By exploiting the signalling and mechanical functions of caveolae, melanocytes respond to extracellular signals sent by keratinocytes to potentiate skin photo-protection. This discovery paves the way to understanding the role of caveolae in cancer - a role that is still little known, as Cédric Delevoye points out :

These results allow us to better understand the versatile aspect of caveolae, which can be beneficial or detrimental during cancer.

The partnership between Institut Curie and Clarins was born in 2012, on the occasion of a seminar. Since then, "a close relationship" has been established between the two entities, considerably facilitating their collaboration, as described by Cédric Delevoye :"This study was based on an exchange of mutual know-how, based on human relations of trust." This relationship had already led them to the successful completion of various research and development projects allowing considerable advances in the understanding of skin physiology.

This long-standing alliance is indicative of the partnership research strategy put in place by Institut Curie, as explained by Amaury Martin, Director of Valorization and Industrial Partnerships at the Institut Curie and Director of Carnot Curie Cancer :

These results are proof that a long-term R&D partnership between Institut Curie and a company, such as Clarins, can produce very high level scientific results. The Carnot Curie Cancer label is a tremendous help in supporting this dynamic but would not be enough without a proactive policy of developing technology transfer within Institut Curie. 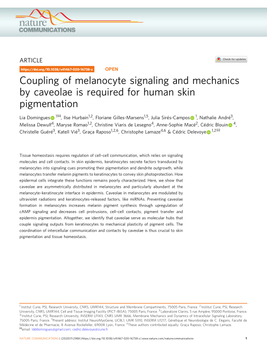