Signature of the first program CHICHE! of FINDMED with a SME active in oncology and the Carnot Curie Cancer Institute

Institut Curie
Share
Four months after the launch of CHICHE! (CHallengez les Instituts Carnot en cHimie et santE), the program of the sector of the drug industry for innovative micro-businesses / SMEs, FINDMED announces the signing of a first between a French VSE that develops innovative molecules for the pharmaceutical industry. cancer treatment and the Carnot Curie Cancer Institute

FINDMED, the research partner of the TPE, SME and ETI drug, is pleased to announce that a first partnership from the implementation of the program CHICHE! last October was concluded.

A trigger to remove hesitations

A FINDMED Project Manager meets a French TPE developing cancer drugs. This TPE explains that it targets a number of indications with a first molecule, but that it stumbles on the unavailability of experimental animal models to target other types of cancers.

The FINDMED representative then explained to the TPE, that the Carnot Curie-Cancer Institute, which already has a large number of experimental models, and a particularly recognized experience in this field, could try to develop one that responds to its specific needs, provided that if this attempt is successful, the TPE then undertakes to enter into a research partnership with Curie-Cancer, to study the first molecule in question (and possibly others later).

The TPE, who is not used to working with the academic world, and who hesitates to engage with a partner she does not know, realizes that if Curie Cancer can not develop the model, nothing will be charged. CHICHE! (Bet you! in French) she replies, and that is how the first contract of this type was concluded.

This contract consists of two steps, with a Go / No Go point in between. The first, funded by the FINDMED program, is to develop the model. If the indicators of success of this stage, defined jointly by the TPE and Curie-Cancer are achieved, then the second step which will aim at studying the product in the model will be initiated, with the financial participation of the TPE this time. On the other hand, if the first step fails, which is not excluded since the model does not exist yet, and as any research project, it is by definition random, then the project will stop, and nothing will be billed to the TPE.

"This example is emblematic because the leader of the TPE was very hesitant to engage with a partner with whom he had never worked and to the extent that for a micro-enterprise whose financial resources are often limited, a bad choice involving significant resources can be dramatic. FINDMED helped both to identify the partner and via the CHICHE program! played a triggering role. It is good that a TPE is committed to an innovative research partnership, to the benefit of its competitiveness, by allowing its products to take an additional step of development, "says Damien Salauze, FINDMED's Operational Director.

"The Carnot Curie Cancer Institute is not a service provider like a CRO that would offer catalog models backed up by recommendations from client companies. Our added value is to respond to each request in a personalized way by bringing the recognized expertise of all the Institut Curie teams. FINDMED's support in prospecting and the possibility of entering the CHICHE program! have been undeniable contributions," says Amaury Martin, Director of the Carnot Curie Cancer Institute and Director of Technologie Transfer and Industrial Partnerships Office at Institut Curie. 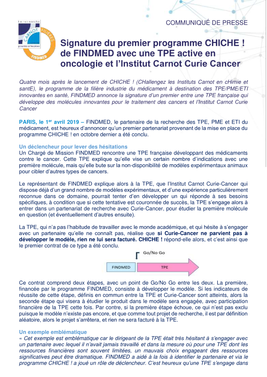 Since 2011, Institut Curie is certified as “Institut Carnot Curie Cancer”. The Carnot label is a label of excellence…