Pediatric cancers: inclusion of the first patient in the clinical trial evaluating a promising therapy born at Institut Curie

Institut Curie
Share
Institut Curie and Onxeo announce the inclusion of the first patient in a clinical trial evaluating a promising molecule that thwarts resistance to treatment in high-grade gliomas in young patients. The clinical validation of this therapy, born in Institut Curie laboratories, represents a major hope for the fight against these high-risk pediatric cancers.

High-grade gliomas (HGG), which represents approximately 20% of tumors of the central nervous system (CNS) in children, continue to have a very poor prognosis with a 5-year survival rate of less than 20%. Surgery combined with radiotherapy or chemotherapy often allows the disease to be controlled. However, this disease control is not durable due to the development of treatment-resistant tumor cells. In this context, Institut Curie and Onxeo, long-time partners, announce that the first patient has just been included in the clinical trial evaluating for the first time a promising molecule, AsiDNA, in combination with radiotherapy in children, adolescents or young adults with recurrent HGG.

AsiDNA, a success story born at Institut Curie in 2002

The "Curie success story" leading to AsiDNA began in 2002. The team led by Marie Dutreix, CNRS research director at Institut Curie, succeeded in developing a new class of drugs: "bait" molecules, the “Dbaits”, which increase the effectiveness of radiotherapy. "In an effort to understand the radiation resistance observed in nearly 20% of patients, we developed small molecules that look like damaged DNA and disrupt cellular mechanisms that resist radiotherapy. Dbaits were born," she explains.  These Dbaits trick the cell into thinking that the amount of damage it faces as a result of radiation or chemotherapy treatment is much higher than it actually is. The tumor cell, "overwhelmed" by the amount of damage it has to repair, then self-destructs.

"It was then necessary to improve the tools, to multiply the angles of observation, to better understand the functioning of Dbait, to validate their effectiveness on models. It took nearly 10 years to develop a possible drug! Not to mention the filing of a multitude of patents and the creation of the company DNA Therapeutics in 2006, which allowed us to look for investors and to launch clinical trials," adds Marie Dutreix.

It was finally in 2016 that the development of these high-potential molecules to counter treatment resistance gained ambition with the acquisition of Institut Curie spin-off, DNA Therapeutics, by Onxeo. This biotech, which specializes in the development of innovative drugs to fight rare or resistant cancers, has considerably accelerated the clinical development of these Dbaits, up to the development of AsiDNA, which is capable of disrupting and depleting the ability of tumor cells to repair their DNA by acting upstream of multiple repair pathways, as soon as damage is reported.

While studies in preclinical models and initial clinical trials in adults [1] have already demonstrated the synergistic effect of AsiDNA in combination with treatments that target and destroy DNA, such as radiotherapy, the inclusion of the first young patient represents a major milestone, as explained by Prof. François Doz, pediatric oncologist, deputy head of clinical research, innovation and teaching at Institut Curie’s SIREDO Center (Soins, Innovation, Recherche en cancérologie de l’Enfant, l’aDOlescent et l’adulte jeune, i.e. care, innovation, research in cancer in children, adolescents and young adults) and this study’s lead investigator: “The enrollment of the first patient is a major step in this proof-of-concept study whose goal is to evaluate the efficacy and good tolerability of the systemic administration of AsiDNA in combination with a new radiotherapy. We hope that this study will provide encouraging evidence enabling an improvement in the prognostic outcome of a disease that is a key unmet need.”

This phase 1b/2 trial, sponsored by Institut Curie, is being conducted within the framework of the European ITCC [2] consortium and will enroll a maximum of 32 patients. A first patient has been enrolled in the study at the Institut Curie’s SIREDO. Additionally, other French centers as well as  European countries are planned to be initiated in the coming months. The study’s first interim results are projected in the first quarter of 2024.

This phase 1b/2 study is supported by a grant from the European Fight Kids Cancer[3] program.

[2] The Innovative Therapies for Children with Cancer (ITCC) consortium is a non-profit organization incorporating 63 European pediatric oncology departments with expertise in conducting early-stage trials in children and adolescents and 25 European research laboratories. 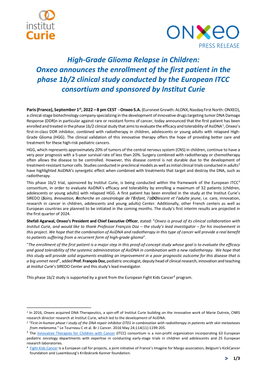 Onxeo announces a fundraising of nearly €10 million to accelerate the clinical development of its flagship technology,…